They stood in the tunnel. The crowd was still settling into the Alamodome and Compass was about to give them their first impression of the DCI Southwestern Championship presented by Fred J. Miller, Inc.

They were also closing out their summer season. This was it.

So, in an ode to their production, “Kaui Kai,” Compass, a SoundSport team from five hours northwest in Midland, Texas, stood in the Alamodome tunnel and performed the Haka, a ceremonial, awe-inspiring dance from Maori culture.

Breathing heavily, with tribal paint scorched onto their faces, they walked onto the field with confidence that seemed to infuse itself into the viewing audience.

“The show is about trying to showcase the Polyneasion culture, specifically the Maori culture of New Zealand,” said executive director and Compass co-founder Paul Garza. “There’s not a story that goes on, it’s really just this open tribute to that culture.” 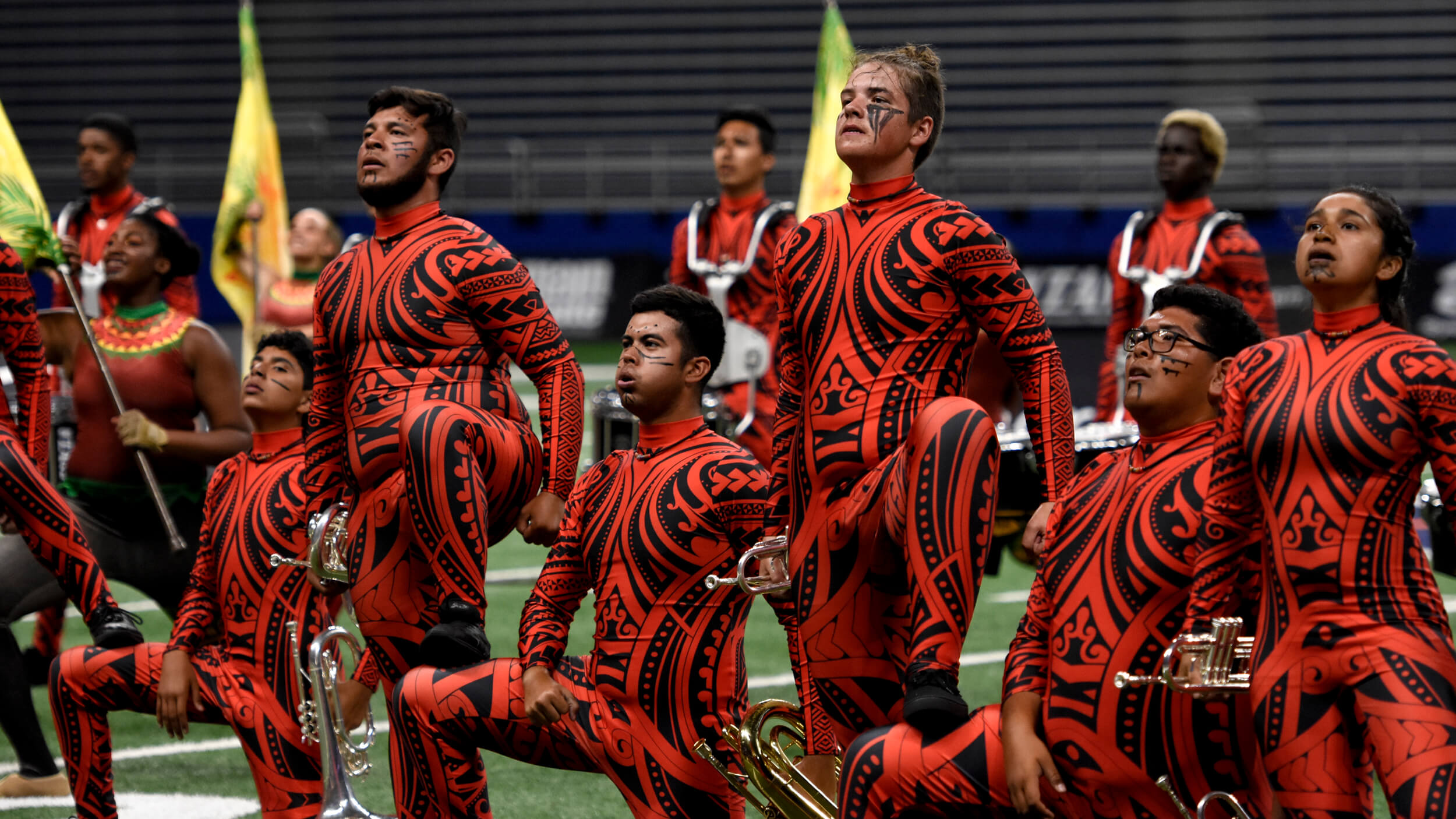 Members of Compass perform at the DCI Southwestern Championship, July 20 in San Antonio.

That culture can be intimidating, a trait so eloquently captured through the robust facial expressions of the Compass members. Its snare line was doing the Haka mid-show; they were yelling, shaking their head with a crazed look emphasized by a wagging tongue.

“It’s really cool to see how every individual takes it and then creates their own character and then uses that as a whole group to create the show,” drum major Nadya Van de Coevering said.

For those who didn’t know who Compass was or what SoundSport is, the Midland, Texas group offered a picture-perfect representation of the showmanship and energy involved.

SoundSport, a program of Drum Corps International, offers instrumental ensembles of any instrumentation and age group to compete in shows of five to seven minutes in length at a low cost.

The format helped kickstart Garza’s vision for a drum corps.

“I love the ability to start off slow and really be able to build the program up,” he said. “A lot of groups early on start with zero funding and no marketing or anything that’s going on. It’s really nice to be able to start from a standpoint and really build the organization correctly and with a really strong foundation.” 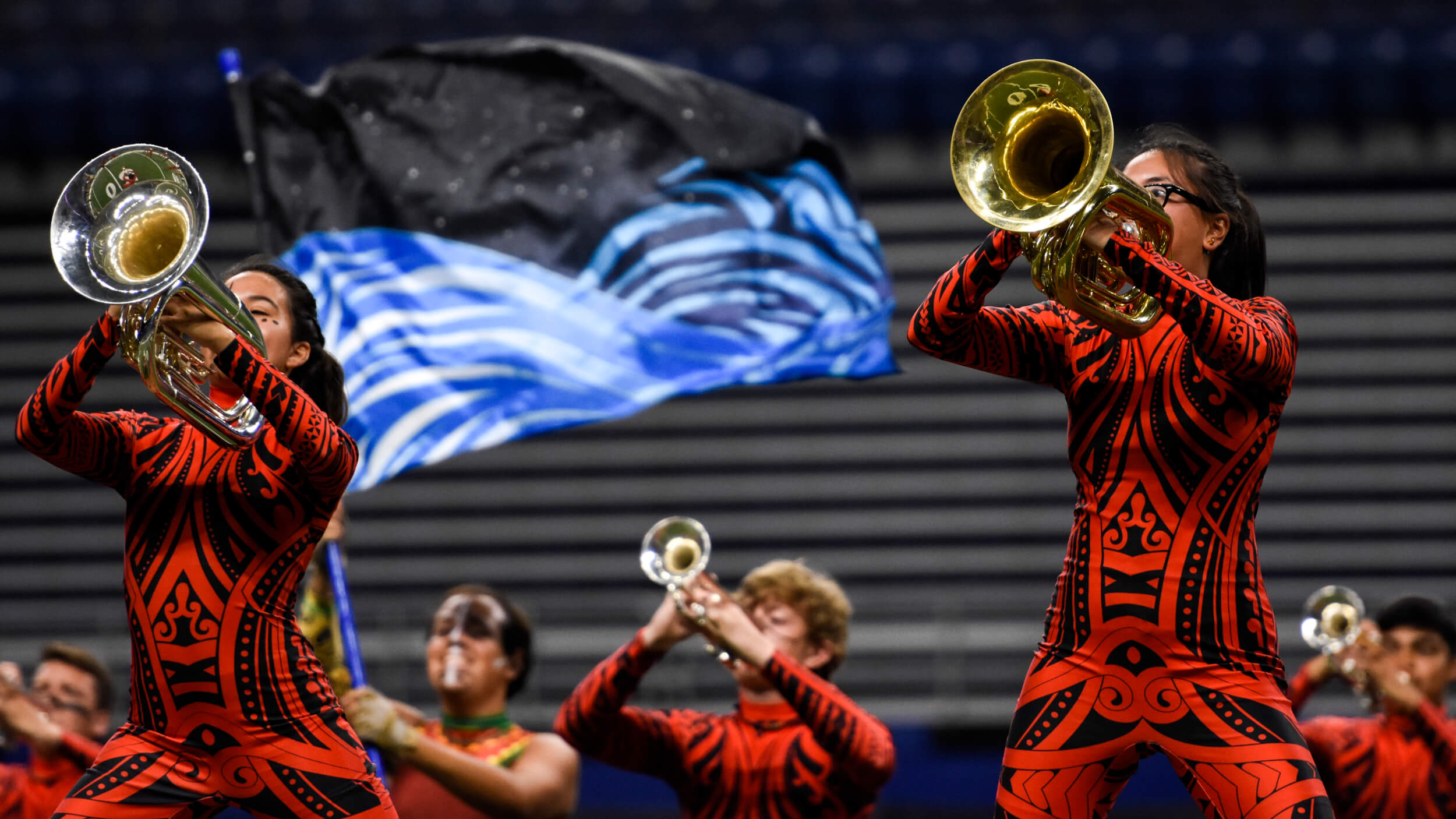 Garza co-founded Compass two years ago, and like any up-start drum corps, has worked to build a stable foundation of both the members and staff. But that happens best when their name is out in the drum corps sphere.

“The progression has been pretty incredible, I think we’re moving pretty fast,” Garza said. “The SoundSport model has done a lot for us making sure that we’re able to go to a limited number of shows and keep our costs down and the progression has been great. We’ve had the chance to, again, build the organization up really sound.”

Compass has taken advantage of the SoundSport rules that allow any age to join the corps. In their second season, in the process of advancing from a 19-member horn line to around 30 members, the Midland, Texas team has a member range that begins at 13-years old and goes up to a 21-years old.

In the middle of that is drum majors Van de Coevering and James McKay.

After an amazing 2019 season, DCI Southwestern SoundSport and Drumline Battle Champions and Best in Show recipients, we look to the future!

Join us for 2020 and all the greatness it may hold! pic.twitter.com/2TjhCP4uHq

“It’s one of the coolest things I’ve ever been a part of. Just because we’re given that opportunity to express all that energy and when we do that it’s unparalleled,” McKay said. “It’s been really great for me.

“I’ve never really been in a leadership position like this, so for me to be able to come in and learn and grow myself as a musician has been really great.”

Compass finished off their summer season that focused their efforts on an all-Texas tour last Saturday in dramatic fashion. It may also set the foundation for Compass’ future growth.

“It’s good to get the feel of it and how drum corps works in general,” Van de Coevering said. “And, hopefully, maybe in a couple years we’ll be doing a full tour.”